The charm of the eternal city in the wedding dresses of Elvira Gramano, a designer embrancing both tradition and innovation, romance and personal style.

Elvira Gramano: the name of a stylist which is forever linked to the charm of the Eternal City. A designer label born of the ingenuity and enthusiasm of one woman who, inspired by the ceremonial wedding dresses of ancient Rome, merged that spirit with her own highly personal style to create inimitable wedding dresses.

Elvira Gramano designed her first dress over fifty years ago, and immediately conquered a refined and demanding public; she arrived as far as China where, all those years ago, she organised a fashion show in which, for the first time, Eastern models wore wedding dresses with a Western flavour an unforgettable event. Also unforgettable was the collection she designed for the Olympics of 1984. The clothes, inspired by the olympic "rings", were widely acclaimed for their originality and style.

In the same period, she also staged a major fashion show in Rome, where, on the Banks of the Tiber river, Elvira Gramano revived the splendour of noble Roman brides in a grand exhibition which foreshadowed today's marriage between fashion, culture, and the arts.

Creativity and tradition handed down in the couture of Elvira Gramano

Creativity and tradition have always been the dominant themes of the spirit of Elvira Gramano, and even today, these same values inspire the work of the company that bears her name.

Continuing the tradition begun fifty years ago, her son Giovanni now works in cooperation with designers and a highly qualified work force.

The small but important secrets of the noble tradition of couturier craftsmanship are combined with the rigour of careful research and the selection of fabrics and decorative elements; all manufactured according to only the most established traditions, created by only the most expert workers in embroidery, and produced only by the most qualified suppliers to the Elvira Gramano Couture House. So even the tiniest detail reflects a meticulous search for perfection.

A vast selection thet will satisfy even the most demanding brides

Models in mikado, gazaar, charmeuse and cady, embellished with decorations made of exclusive lacework, devorèe and repoussè embroidery, superb in their essentials, veritable jewels of the highest school of craftsmanship, making the best use of both linear designs of a masterly cut and the most sumptuous creations.

An extensive familiarity with brides of every nationality allows the Elvira Gramano Couture House to propose original and highly personal creations, with full respect for local traditions.

Only this well-established experience allows us to fulfill the demands of brides the world over when they cross the threshold of the Elvira Gramano Fashion House.

Class and timeless elegance in the couture collection

Elvira Gramano is synonymous with bridal gowns for women who live in today's world without renouncing a sense of refined class. To these women, the Elvira Gramano Couture House dedicates the "High Fashion" collection.

Ceremonial dresses from rich, sumptuous styles to creations that stand out for their absolute simplicity.

Every detail is attended to with the highly personal taste for which Elvira Gramano has always been famous.

Until a few years ago, the name Elvira Gramano evoked an image of fairy-tale weddings, whose protagonists were the many celebrated women who had chosen this Roman stylist for their wedding dresses. Thus, with the timidity born of respect, one imagined the cost of these creations, creations which had even appeared on the front covers of magazines, as almost unapprochable.

But today there is great news. While remaining attentive to the tradition and quality that have made it famous throughout the world, the Elvira Gramano Couture House has recently added to its High Fashion Collection a Ready-to-Wear line, offered at competitive prices and distributed in selected sales outlets both in Italy and the rest of the world.

It's a "young" collection, reflecting the spirit of those brides who don't wish to be literally "transformed" on that important day, but simply to wear the image to which they feel most suited: an image of simplicity and underlying elegance.

In over half a century of history, the Elvira Gramano Couture House has outfitted the weddings of famous and important persons, yet it has never forgotten the prime objective of its founder: to dress each and every bride in a way that will make her feel, if it's possible, even happier. 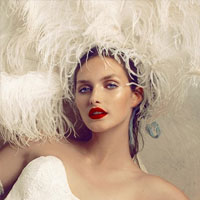 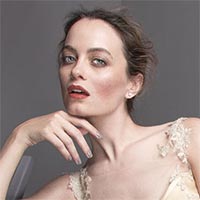 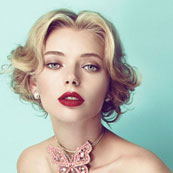 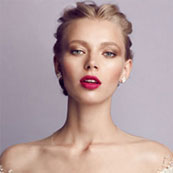